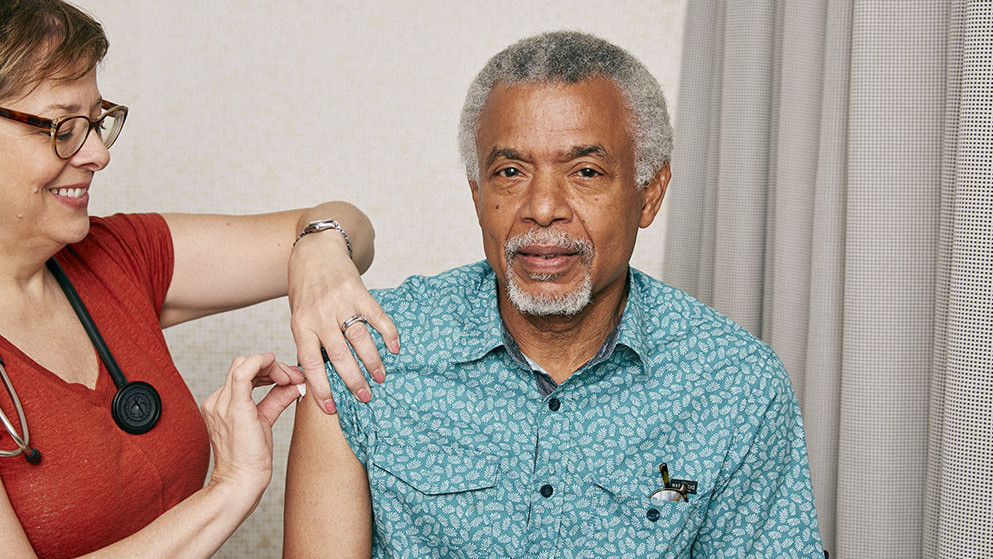 An experimental vaccine that contains three different hepatitis B virus (HBV) proteins may offer more protection—especially for older adults and people with a weaker immune system—than existing vaccines, according to study results presented at the recent IDWeek 2019 conference in Washington, DC.

Hepatitis B vaccination has led to a dramatic drop in new infections worldwide—a decrease that is expected to ultimately lead to a decline in cirrhosis, liver cancer and the need for liver transplants. Immunization is recommended for all infants starting soon after birth as well as for at-risk adults who were not vaccinated as children. These include people living with HIV, gay and bisexual men, people who inject drugs, people with chronic liver or kidney disease, those at risk for occupational HBV exposure and travellers to areas where the virus is more common.

However, some adults who receive the complete three-dose HBV vaccine series do not achieve full protection, meaning they don’t produce high enough levels of antibodies against the virus. This is more likely among older individuals and those with poorer immune function. In addition, protection may wane over time, leaving people vulnerable years after they were vaccinated.

The currently approved HBV vaccines—Engerix-B, Recombivax HB, Heplisav-B and the dual hepatitis A and B vaccine Twinrix—are monovalent, or single-target, vaccines that contain a genetically engineered version of the hepatitis B surface antigen (HBsAg) known as small S.

Sci-B-Vac, from VBI Vaccines, is a trivalent, or triple-target, vaccine that contains the small S antigen plus two larger viral surface proteins known as pre-S1 and pre-S2. Studies indicate that the combination may lead to more rapid and more complete immune protection, especially for people who tend to respond more poorly to the monovalent vaccines.

“Hepatitis B is one of the most serious global infectious disease burdens, and successful vaccination of both adults and infants is critical to controlling and, hopefully someday, eradicating the disease,” study investigator Timo Vesikari, MD, PhD, of the University of Tampere Medical School in Finland said in a VBI Vaccines press release. “If approved, this vaccine could play an important role in the prevention of hepatitis B, addressing a significant unmet medical need in the adult population.”

At IDWeek, Joanne Langley, MD, of Dalhousie University in Halifax, Canada, presented findings from the Phase III PROTECT trial, which enrolled 1,607 adults at risk for hepatitis B in the United States, Canada and Europe. About 60% were women. By age, 19% were in the 18 to 44 range, 45% were ages 45 to 64 and 37% were 65 or older.

Participants were randomly assigned to receive 10 microgram doses of Sci-B-Vac or 20 mcg doses of Engerix-B administered at the start of the study, about a month later (Day 28) and about six months later (Day 168), for a total of three doses.

The study showed that Sci-B-Vac was noninferior to Engerix-B, meaning it was at least as effective, among people age 18 and older. In this age group, 91.4% of Sci-B-Vac recipients and 76.5% of Engerix-B recipients achieved adequate immune protection four weeks after the final dose (Day 196). The protection rate remained higher in the Sci-B-Vac group at Day 336 (89.0% versus 68.8%, respectively).

Among participants age 45 and older, Sci-B-Vac reached the study’s threshold for statistical superiority at Day 196 compared with Engerix-B, with protection rates of 89.4% versus 73.1%, respectively.

However, as VBI Vaccines reported earlier this year, the PROTECT trial did not meet a secondary endpoint of showing that two doses of Sci-B-Vac worked as well as three doses of Engerix-B.

Both vaccines were generally safe and well tolerated with no notable safety problems, Langley reported. Adverse events were consistent with the known safety profiles of the vaccines in prior studies.

Based on the results of this and another Phase III trial, VBI Vaccines indicated that it plans to request Food and Drug Administration approval of Sci-B-Vac by mid-2020. The trivalent vaccine is already approved in Israel and 10 other countries.