‘She’s dying before my eyes’: Desperate mother fears for her daughter, 12, at risk of organ failure because she eats only a handul of food a day due to a crippling phobia of EATING

A 12-year-old schoolgirl is at risk of organ failure because of her phobia of eating which means she is only able to eat a handful of food each day.

Grace Daw, of Cheshire, has feared choking on food her whole life and can take up to an hour to eat one mouthful of food, storing it in her cheeks ‘like a hamster’.

Her mother Janine Daw, 48, says she is watching her daughter ‘dying before her eyes’, as her weight has plummeted to just 4st (25.4kg).

Desperate, Ms Daw even gave up her job as a fitness instructor to become a full-time carer and study children’s mental health in a bid to save her daughter’s life. 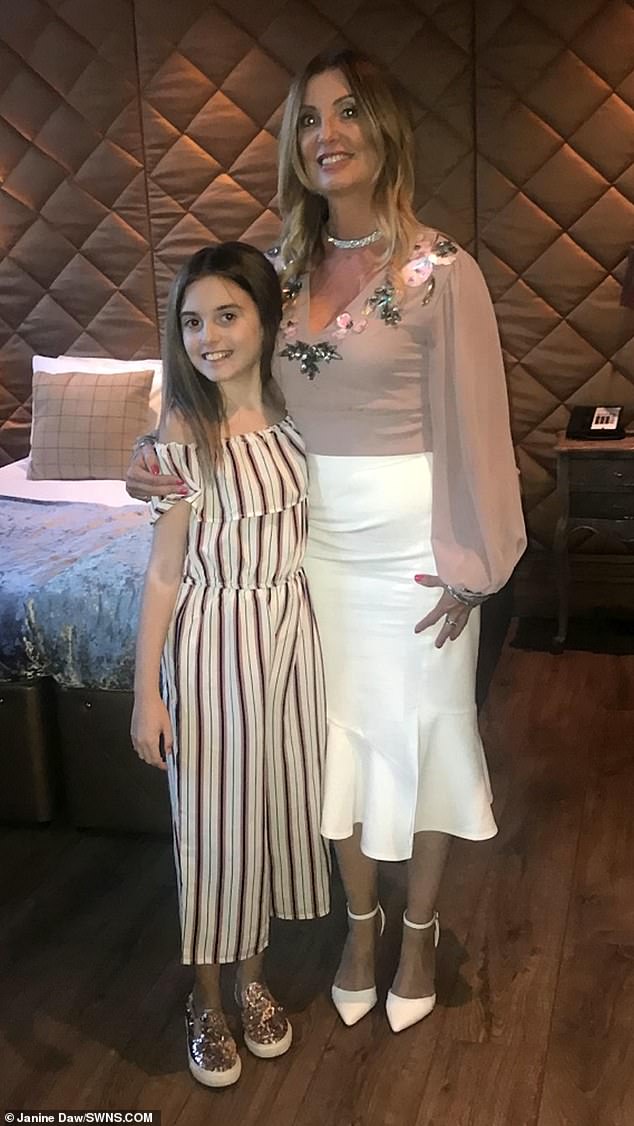 Janine Daw, 48, from Cheshire, feels hopeless for her daughter, Grace Daw, who is at risk of organ failure because she eats only a handful of food a day due to a crippling phobia of eating 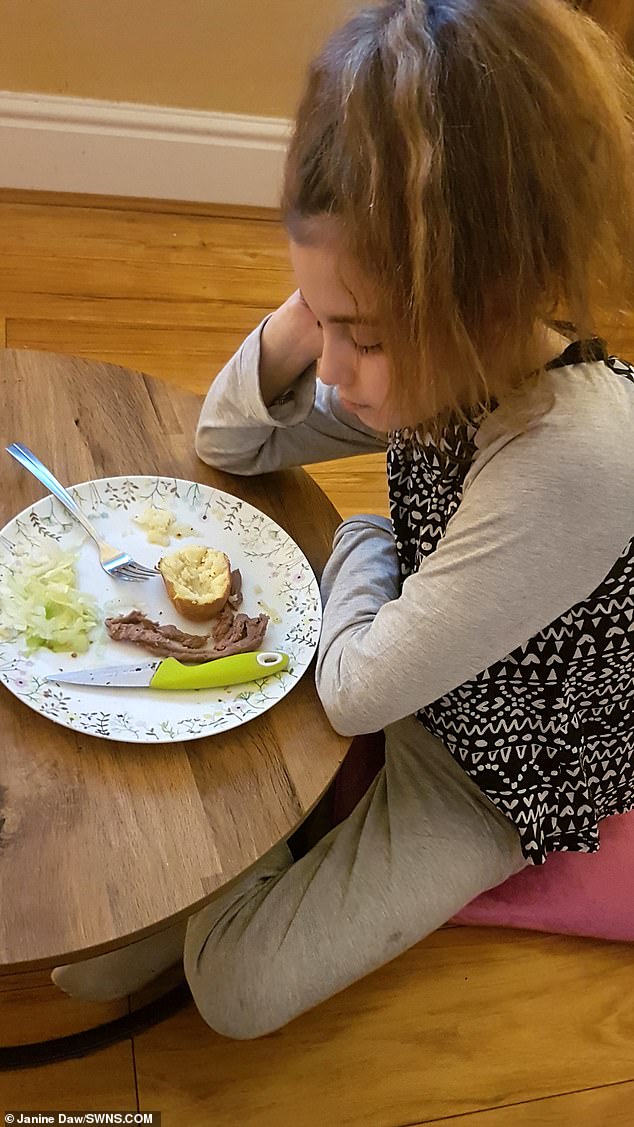 Grace Daw, 12, can take up to an hour to eat a mouthful, or anything out of her ordinary diet of ice-cream, crisps, soup or pasta. She stores food in her cheeks, unable to swallow 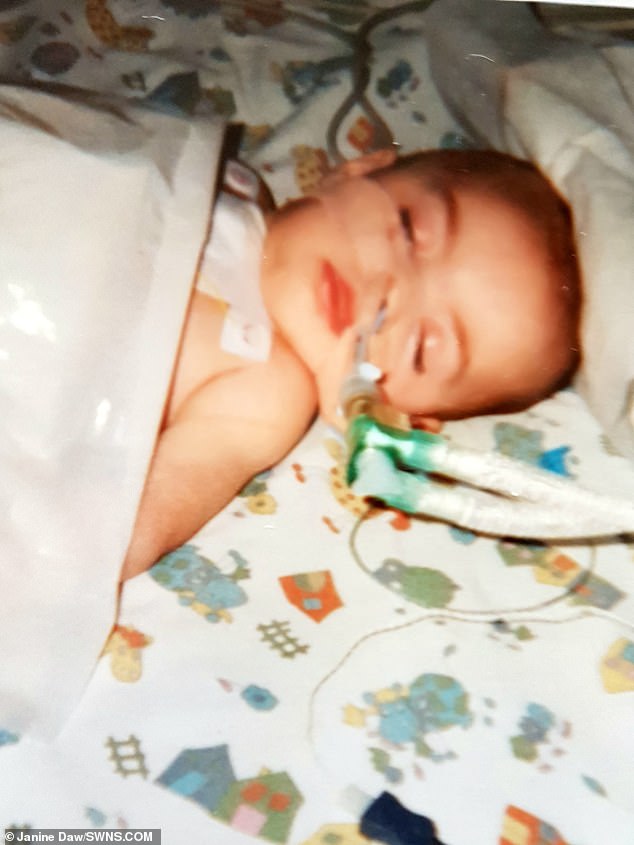 Grace Daw’s problems started as a newborn, although it is unclear what the root cause is. She was unable to keep milk down after breastfeeding or bottle feeding, and was fitted with a feeding tube. Her mother claims it was fitted wrong, giving her a phobia of choking

Grace struggles to eat anything outside her unusual diet of ice cream for breakfast, soup for lunch and nibbles of crisps in-between.

Anything which requires chewing leads Grace to rush to the toilet and vomit, her mother said.

‘She’s stopped growing because of this. She’s incredibly pale and has dark circles around her eyes. She just constantly looks ill.’

Pseudodysphagia is the fear of choking.

It is sometimes confused with phagophobia, or the fear of swallowing.

As with many phobias, it is thought to be triggered by an event in childhood.

Anxiety and tension can cause throat muscles to constrict, which, ironically, can further increases the chance of choking.

Because it is a phobia, it is seen as a mental health problem, which may need therapy if methods such as chewing until food is mushy does not help the patient.

The phobia is associated with anxiety, depression, weight loss and panic attacks.

It is not clear how many people suffer with the phobia.

The roots of Grace’s condition are unclear, according to her mother and professionals.

Even though some nurses branded Ms Dawn a ‘paranoid mother’, several psychologists have suggested Grace suffers with pseudodysphagia – a chronic fear of choking.

But Ms Daw said nobody has come up with a solution.

She said: ‘We’re just not getting the help from professionals. I had a breakdown a couple of years ago because it was all getting a bit much.

‘I’m working tireless to help save Grace only to watch her almost dying before my very eyes.

‘I’m even studying to become a children’s counsellor to try and help. I’ve had this constant battle for 12 years and I just don’t know what to do.

‘It’s now escalated from a fear to a genuine mental health issue. It’s the only thing she’s ever known.’

Grace is fed through a tube straight into her tummy – called a mic-key – which was fitted when she was four months.

The type of feeding tube is used when a patient has a functioning gastrointestinal (GI) tract but cannot get enough nutrients by eating, therefore becomes at risk of malnutrition.

It was meant to be a temporary solution to assist with Grace’s eating. But even talking about removing it to try and learn eating habits terrifies Grace.

Relying on the tube as her main source of nutrition, she has lost half a stone in the last two months.

Doctors have said it is only a matter of time before her organs start failing, Ms Daw claims.

Ms Daw has spent years making daily visits to Grace’s primary school in order to give Grace feeds via her mic-key, as she won’t eat packed lunches or school dinners.

But with her daughter left out of birthday parties and sleepovers, Ms Daw decided to stop visiting when Grace started high school in September amid fears of bullying. 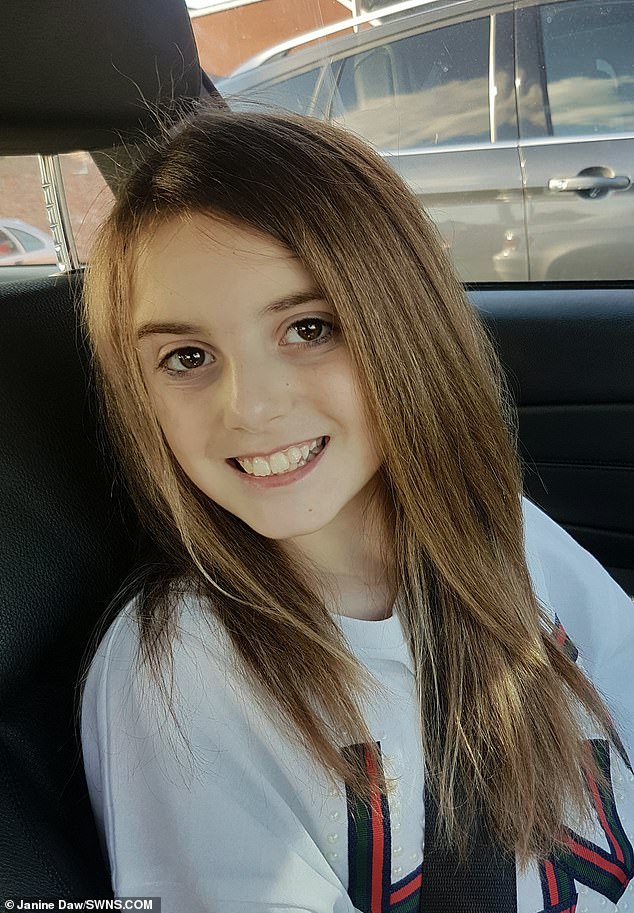 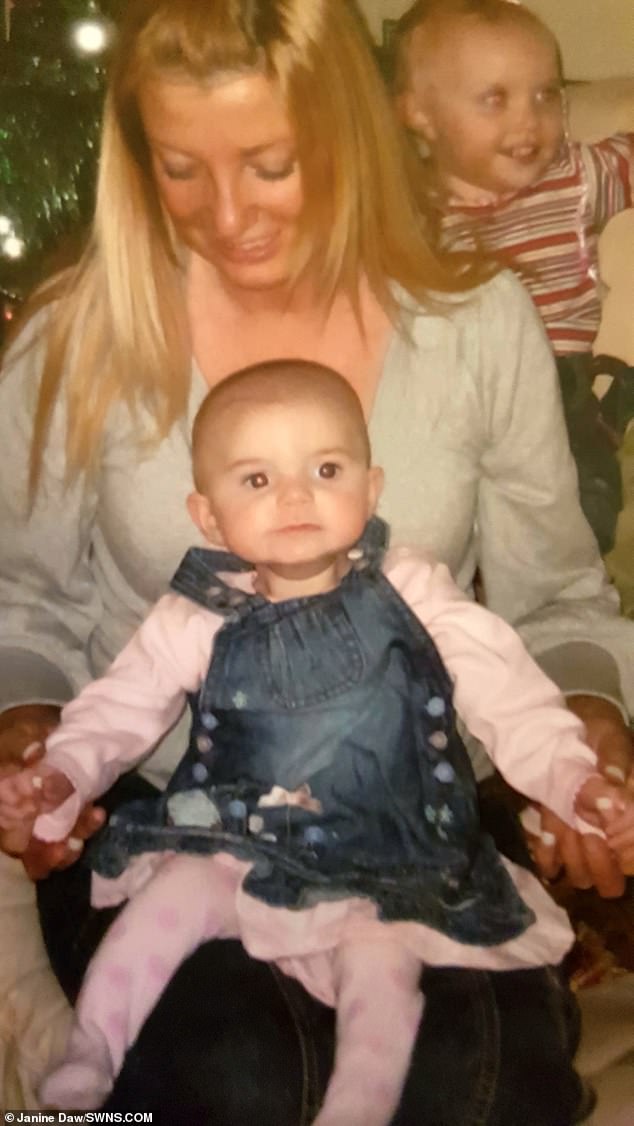 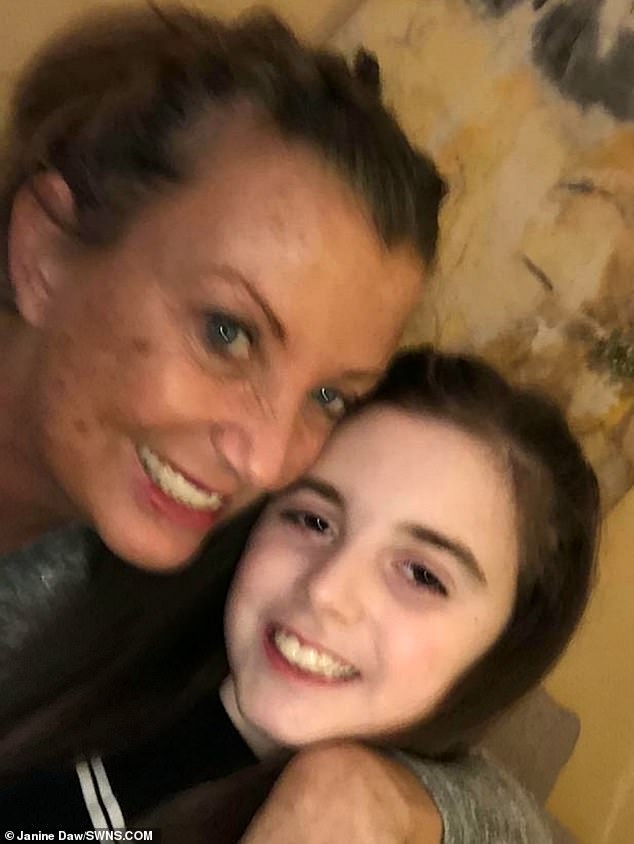 Grace’s condition has baffled doctors, and Ms Dawn has said she has been called a ‘paranoid mother’ by nurses. She has taken the issue into her own hands to solve the problem

Grace’s inability to keep food down started as a newborn when she would instantly throw up after breastfeeding or bottle feeds.

At risk, doctors put a feeding tube down Grace’s throat so that she could be fed at such a crucial age.

But Ms Daw claims the tube wasn’t fitted properly, leaving her daughter ‘frothing from the mouth’, and with a life-long phobia of choking.

She said: ‘She just has this fear of choking which she’s had since she was a few weeks old.

‘During the first few weeks of her life she would projectile vomit after breastfeeding or bottle feeds so doctors decided to fit her with a feeding tube.

‘But it was shoved down her and she was literally frothing from the mouth.

‘I always thought that was a figure of speech until I saw it with my own eyes. I was sick with worry thinking every night would be her last.

‘When she was released I knew something still wasn’t right. I visited the hospital seven times and one time I overheard the nurses talking and calling me another “paranoid mother”.

Read More:  Exclusive: A new test can predict IVF embryos’ risk of having a low IQ

‘But I knew I was right. I had two daughters before so it’s not as if I was new to it all.’

When Grace was four months old she got a gastronomy feeding tube – a mic-key button – which feeds liquid food straight into her tummy.

It was supposed to be a temporary fix while she moved on to solid foods.

But months later during a follow-up appointment doctors spotted she had a rare congenital heart defect where the heart doesn’t get enough oxygen.

Medical staff at the time said the condition, anomalous left coronary artery from the pulmonary artery, or ALCAPA, was behind Grace’s food and choking problems.

At nine-months-old she had open heart surgery, which gave her mother hope that her daughter would begin eating.

However, days after the eight-hour surgery, Mrs Daw noticed Grace still had no interest in eating. 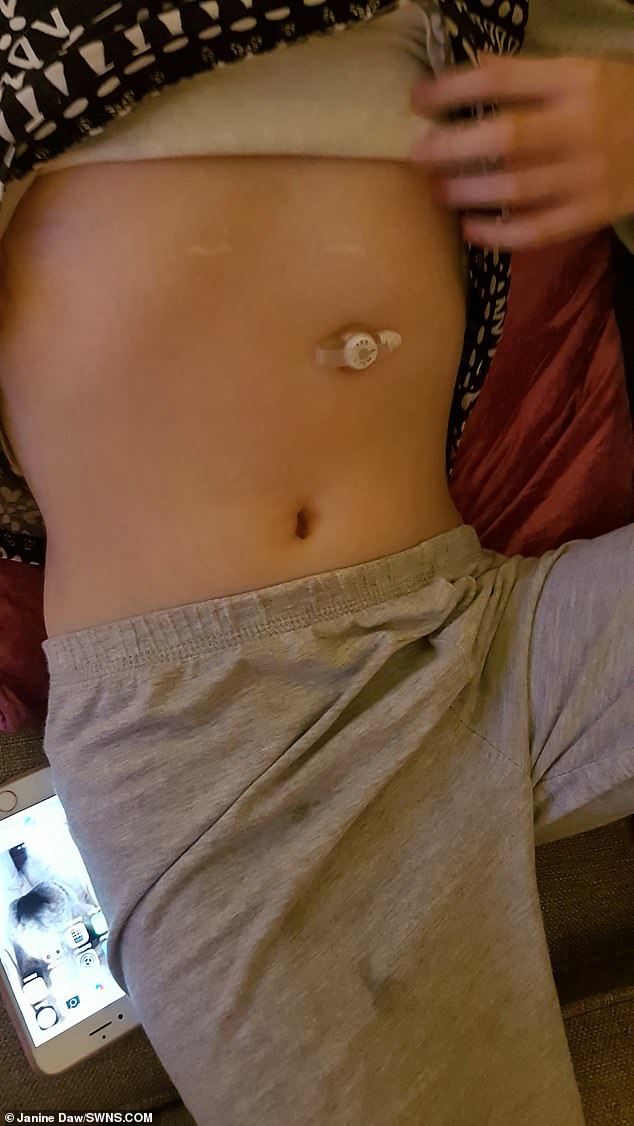 Grace Daw has had a gastronomy feeding tube – a mic-key button – which feeds liquid food straight into her tummy, since she was four months old 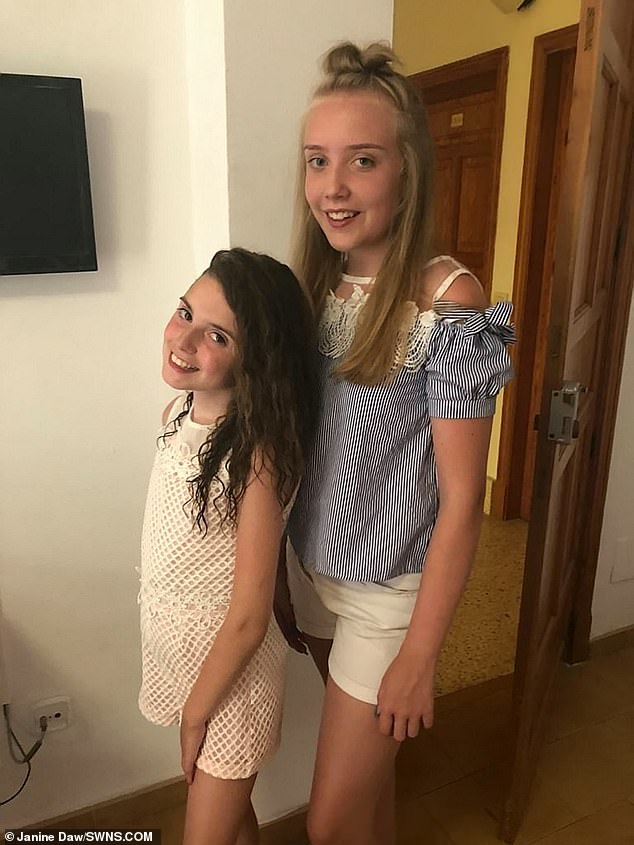 Grace’s condition affects the whole family, her mother, who has quite her job to care for her, has said. Pictured with her older sister Ellie, 16 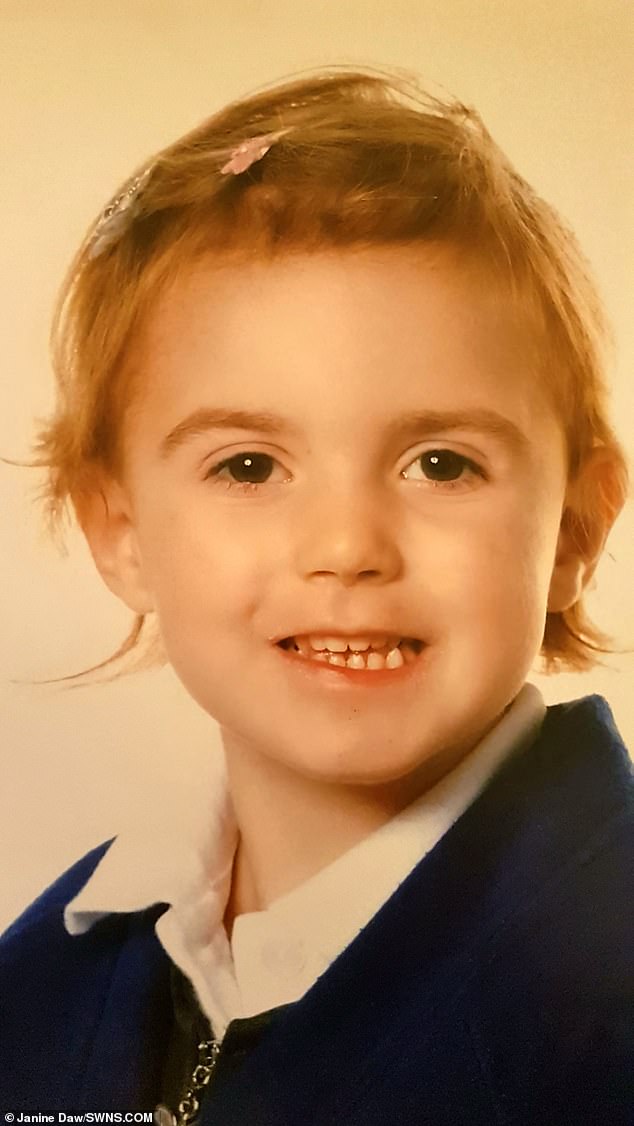 Ms Daw has spent years making daily visits to Grace’s primary school in order to give Grace feeds via her mic-key, as she won’t eat packed lunches or school dinners

June Davison, senior cardiac nurse at the British Heart Foundation, said: ‘ALCAPA is a rare heart condition that you can be born with.

‘Blood that is lacking in oxygen is carried to the left side of the heart, depriving the heart of oxygen, which can cause damage to the heart muscle.

‘Surgery is needed to correct the condition and nowadays people with ALCAPA have a much better prognosis.’

An ‘ALCAPA (anomalous left coronary artery from the pulmonary artery) is a problem that occurs when the baby’s heart is developing early in the pregnancy. The developing blood vessels in the heart do not connect correctly.

In the normal heart, the left coronary artery starts in the aorta. The aorta is the major blood vessel that takes oxygen-rich blood from the heart to the rest of the body.

When this defect occurs, blood that is lacking in oxygen is carried to the left side of the heart. Therefore, the heart does not get enough oxygen. When the heart muscle is deprived of oxygen, the tissue begins to die. This condition leads to a heart attack in the baby.

A condition known as ‘coronary steal’ further damages the heart in babies with ALCAPA.

This results in less blood and oxygen to the heart. This problem will also lead to a heart attack in a baby. Coronary steal develops over time in babies with ALCAPA if the condition is not treated early.

Read More:  Gold is pretty, but it is not an investment

She hoped her daughter would grow out of it.

But 12 years later, Grace, who is now at secondary school, has not seen any developments, and doctors have been unable to remove the mic-key.

‘She’ll store it in her cheeks like a hamster. I’ve tried mimicking her at dinnertime but it’s human instinct to swallow it. It’s more hard work to keep it stored in your cheeks.

‘She does okay with dissolvable foods – things like ice cream, yogurt, crisps – anything which doesn’t require the effort of chewing.

‘But even then it won’t be a regular sized portion; it will be a handful of crisps or two spoonfuls of yogurt which will take over an hour to eat.

‘If we mention taking out her mic-key she goes hysterical. It’s now become so extreme, I’ve just hit a brick wall.’

Ms Daw has made tireless efforts to improve her daughters outlook on food.

She said: ‘I used to make tailor made portions for her for dinner but it would just be a waste of effort as she wouldn’t eat it.

‘Now I just give her a smaller portion of whatever I make everyone else.

‘I stopped giving her toast in the morning. For ease I give her two small scoops of ice cream in the mornings but she’ll only end up eating half.

‘She uses every excuse there is when dinner is served. It’ll be “I don’t like this anymore”, “I’m just going to the toilet” or “I’m feeling really sick”.

‘The school are aware of her condition and even make special portions for her. But say if they make a small bowl of pasta for her she will only eat six pieces.

Ms Daw is now studying at college to try and solve the problem herself.

She said: ‘It’s been a constant battle all her life to be heard. All they tell me to do is to up her night feeds as if that’s a simple solution.

‘I decided to sign up to the college course when Grace started high school in September as I was adamant I wouldn’t go into the school to do feeds,’ she said.

‘I didn’t want her to be labelled and bullied for something she obviously can’t help.

‘But when I’m doing the college work I feel like I don’t have time for Grace so I feel like I’ve let her down.

‘I’m studying hard so I can understand the eating phobia as nothing has worked for Grace. That’s how desperate it’s become.’

Christmas, a time with lots of food, will be hard for the family. Ms Daw said Grace will put everything on her plate, but will mash it up, and then keep a mouthful in her mouth for 30 minutes.

‘Last year I was over the moon because she ate two chocolates from her advent calendar’, she said.

‘It’s not the ideal scenario but I don’t think anyone understands how hard it is.

‘This has a knock-on effect on my other kids too. I’m watching my family fall apart in front of my very eyes.’