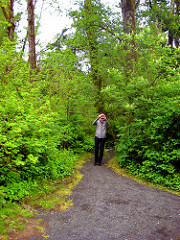 Nasal congestion is an inflammation or infection of the inside of the nose and nasal passageways.  The infection can be bacterial such as part of a sinus infection. It could be viral such as a cold or an allergic reaction with inflammation and nasal congestion. The nasal passageway is like a main hallway in which air is constantly flowing in and out from respirations from the lungs through the nose. The normal nasal mucosa is pink.  Inflamed or infected mucosa is red.  Allergy usually has blush nasal mucosa.

Extending off this main hallway on each side are hollow areas like empty rooms with no doors.  These empty rooms extending off the nasal hallway are your sinuses.  As air flows through the main nasal hallway, it will swirl in little eddies currents in to these empty rooms of your sinuses.  As air swirls in and about your sinuses, the sinuses will slowly gather dust, dirt, viral, mycoplasma and bacteria.  The sinuses do act somewhat as a rudimentary filter for smallamounts of debris.  When overwhelmed, the airway passages in your nose and in the rooms of the hallway of sinuses get excessive debris and bacteria.  This will often cause pooling of fluids, swelling, inflammation, further complicating obstructions, and setting up for bacterial and other infections. The sinuses were not meant as filters but rather as lightening of air cells to keep the head erect. Gorillas have no sinuses that is why usually their face usually tilts down. This is due to heavy solid bone mass not hollow with sinuses of the face. The nose has turbinates covered by nasal mucosa which is highly vascular that heat and cleanses the incoming and outgoing air.

There are four primary sinuses usually in pairs. There can be multiple sinuses of each sinus. The sinuses may vary on number on the left vs right.

B. Your sphenoid and ethmoidsinuses are slightly lower deep inside behind

the central region between your eyes and upper nose. They are set back

deeper in the bones of your skull below your brain. They are set back

deeper in the central region between your eyes and nose. They are

about the quarter of volume of your maxillary sinuses.

the bones in your eyes on your face under your cheek muscles. Their size

usually can be that of almost a hollow golf ball.

Nasal infection or inflammation is a common medical condition that affects millions of people. Patients suffer from seasonal environmental infections and allergic nasal problems. These symptoms are in the patient’s history of sneezing, allergy response postnasal drip, cough, stuffy or runny nose, and watery eyes.  They absolutely affect the patient’s quality of life.  They can lead to recurrent respiratory, sinus, ear, and throat infections. They usually include an asthma exacerbation, headache, fatigue, and/or bronchitis. Allergic nasal problem is treated with medical agents singly or in multiple combinations to reduce the response and increase the quality of life.  It can often be considered as the starting trigger of a complex mechanism.  Initial therapy is usually nasal inhaled steroids.  It is a common chronic disorder in many adults and children. Sinusitis and allergies may additionally give anyone daytime fatigue, irritability, impaired learning, cough, interruption of sleep, and great reduction in the quality of life. Sinusitis and allergies result in lost workdays and reduced effectiveness.  Allergy triggers should be specially identified and eliminated if possible at all.  If environment triggers cannot be avoided; antihistamines, decongestants, mast-cell stabilizers, nasal steroid, immunotherapy and/or other steroid, and antibiotics may be dispensed.

Radiology of the sinus and possibly better a CAT scan may get to the bottom of why problems are occurring.  There may be polyps or a growth resulting from this condition over a long-term period of inflammation poor drainage, obstruction, a bad tooth, and partial tooth removal after extractions, and often other-congenital malformations and drainage problems.  These differences on a simple X-raymay reveal extremely important information of short, long-term, and the precise direction of appropriate therapy.  The patient could often perceive these chronic, varying symptoms, sudden, or new, when in reality they have been ominously present for week’s months or years. They are often much more significant than they appear or realize from day to day.

Antibiotics work to kill the bacterial infections that have developed. Primarily or secondary they are used and truly necessary. Sometimes they have to be used up to six weeks. They should be given to clearly advanced or recurrent infections.  Antibiotics are not benign drugs without possible complications. Amoxicillian the book drug of choice is possibly 70% resistance in the Atlanta area.  Multiple antibiotic are often used by ENT surgeons often may not work resulting in surgery.  There is in vitro, in the laboratory, in Latin.  And there is in vivo which is in daily life your home town which is where our varied patients at are treated precisely from the history, X-ray, and physical style, exposures, and past trials. Specific sensitivities or appropriate testing determines yearly antibiotics to be used.

Read More:  Purchase the Best Quality Food Products and Antibiotics for Your Pets

Decongestants are agents giving vasoconstriction of nasal blood vessels. They are fast acting and usually perceived by the public to give an immediate response and are apparently are effective. They are likely to cause rebound congestion within hours and worsening and possible addiction with use. They may dry the mucosa so much they usually bleed and it destroys the lining of the sinuses and nose and allows opportunity for infection.  They may possibly lengthen the time of the infection.  Oral decongestants are longer lasting but have many side effects of fast heartbeat, excitability and may not be effective in the elderly, hypothyroid, cardiac, or hypertensive patient. The above medicine usually should not be taken for more then 1-3 days and usually never longer than ten days because they may have rebound congestion.  These are quite addictive.  Nasal corticosteroids sprays are considered initial treatments.  They stop the synthesis, triggering or manufacture of allergy mediators often starting a complex process of or Allergy.  Other types of steroids may be necessary tablet or injectable form for short term.  Epinephrine stops cholinergic receptors in the nose.  They stop nasal secretions in the nose possibly affecting progressive infection count and the constructive normal immunoglobulin response. They can give excessive nasal dryness leading to nosebleeds.  Mast-cell stabilizers block the degranulation of mast cells from releasing allergic and inflammatory mediators but usually they last about 6 hours. Shot for allergens desensitize a patient with allergy injections.  Serum injections may take up to 3-5 years on aconsistent basis to be truly effective; but are a solution.  They may as well constructively desensitize the patient from the trigger

Allergy testing could be necessary. From simple to very complex starting with the basics of common things, you are often exposed to in the real world, and things you commonly ingest as food.  More specific individual testing and gross widespread testing from the family dog or cat, to food, and spices may be effective and necessary to be tailored to you.  This is usually not the first step directive, but they may be immediately considered for you with your specific history, physical exam, X-ray, severity, and system or specific type of problem.  Antihistamines block the release of histamine to its receptors. This stops the symptoms resulting from the effects of histamine of the eyes, nose, and sinuses they could be administered often with a steroid or in other combinations with decongestants, antibiotics, and many other medications and/or specific therapies with specific testing.  Immunizations of flu and pneumonia vaccine, which protect you from complications of chronic bronchitis and pneumoniafor years to life; are often very helpful as great therapeutic preventatives in these very special medical problems.

Dr. Laurusonis was conferred his Doctor of Medicine degree in 1983 and has been actively taking care of patients since completing his Internal Medicine residency in 1987 in the Garden State of New Jersey. Dr. Laurusonis has been licensed in four states but ultimately chose to permanently relocate to Georgia with his family and begin a private practice. Through his extensive experience in Internal Medicine, as well as in Emergency Rooms throughout the United States, Dr. Laurusonis saw how traditional Emergency Rooms were often overwhelmed by patients suffering medical conditions that were urgent but may not need the traditional “Level I Trauma Center”.  Patients often waited six to twelve hours to be seen by a physician, were riddled with thousands of dollars in medical bills, and were generally unhappy with the system.

Dr. Laurusonis decided to open an Urgent Care Center instead of a 9-5 doctor’s office. Through the last fifteen years he has received accolades from the community and his patients.  He has expanded his practice to include many cosmetic therapies that have previously been treated with painful and extensive plastic surgery. He has been invited to the White House numerous times, has been named Physician of the Year, as seen in the Wall Street Journal, and has served as Honorary Co-Chairman on the Congressional Physicians Advisory Board

Dr. Laurusonis and his practice, Doctors Medical Center, is open 7 days a week from 7:30 am to 9:30 pm offering such services as lab, x-ray, EKGs, aesthetics (Botox, dermabrasion, sclerotheraby and veins etc.), cold/flu, sore throats, fractures, sprains, lacerations, GYN, Pediatrics, Anxiety/Insomnia/Depression Treatment, skin tag/mole removal, veins, allergies, asthma, physicals–just to name a few. Dr. Laurusonis welcomes you to either make an appointment or just walk-in to see him. Dr. Laurusonis will take the time to speak with you about your concerns–no problem is too big or too small. If you need additional services we have specialist referrals available or we can refer you to the neighborhood hospital emergency room. Give Doctors Medical Center a call–Dr. Laurusonis will be happy to speak with you.