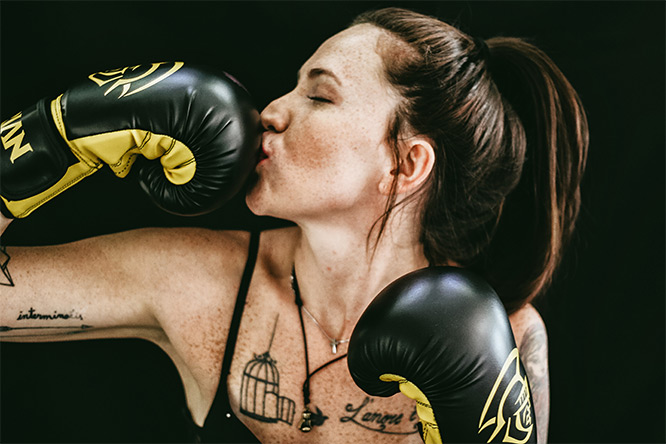 Combat sports were once seen as something that only men did, but thankfully that attitude is very quickly changing. It’s not just about fighting and competing, in fact, many women take up Muay Thai purely for the health and fitness benefits of the sport.

Now you know it’s not all about fighting, you’ll learn that there are all kinds of benefits that women can get from Muay Thai – physically, emotionally, socially and mentally. A woman who takes part in Muay Thai will be a stronger, more confident and more capable woman than women who don’t practice the sport and you’ll learn the reasons why in this piece.

In the article, we’re going to discuss in depth five reasons why women should try Muay Thai.

With a growing interest in Muay Thai and combat sports in general, many clubs are now offering women-only or mixed Muay Thai sessions. What was once an intimidating male-only gym atmosphere, is now a more welcoming and friendly environment where women can feel safe and get a great workout too!

With that in mind, clubs have catered for women by adapting sessions (no mixed sparring) and providing a wider range of equipment (women’s gloves and guards). This provides proper access to the sport rather than treating women as an afterthought.

The exact same benefits that men gain from Muay Thai training are passed on to women. They improve physically, mentally, spatially, emotionally and socially. Having a regular training session in your diary, with the same people each week improves your fitness and helps you to meet like-minded people, growing your social circle.

Read More:  Ensuring that carpeted surfaces throughout your home look their best is really a overwhelming job certainly. In the event you absence ample understanding of the assistance provided by rug cleaning pros, you happen to be at an even greater drawback. Consequ

There are few workout classes that can offer you the same range of benefits as Muay Thai training. From the sheer intensity of the workouts to the variety of the movement patterns and skills, you just can’t replicate what you learn in Muay Thai in other ways. All of the Legs, Bums and Tums classes in the world won’t train you in the way Muay Thai will!

By combining strength movements, new skills, direction changes, flexibility, jumping and cardiovascular work, all done at a really high tempo, Muay That training is one of the most intense and demanding workouts you can try. You will raise your heart rate quickly and burn a lot of calories. There’s a reason why people who do Muay Thai are always in such great shape!

There is literally no element of your fitness that you won’t improve by training in Muay Thai.

When you perform high-intensity movements frequently, you build strength. When you build strength, you become fitter, leaner and more powerful. Your muscles respond quickly and exercises that you once wouldn’t be able to do become much easier.

The training you need to do in order to become better at Muay Thai builds an all-body strength that a lot of other sports and workouts just can’t match. In Muay Thai training you’ll often be performing squats, push-ups, burpees, pull-ups, core exercises, lunges etc, which will help you build a really strong and athletic body using nothing but your own bodyweight!

Read More:  Oil Pulling - How to Do it, Health Benefits & Ayurveda View

Muay Thai Will Boost Your Confidence

You’ll be looking better, getting more compliments, feeling happier in outfits and about yourself in general. Your body may be feeling better thanks to the training, and aches and pains may have disappeared. Day to day life may be easier because of your new fitness levels and you’ll have higher energy levels.

You’ll be learning self-defence, so your social anxieties may reduce. You won’t be as scared in certain settings as you once were, given you know how to protect yourself.

Through Muay Thai You Will Meet Some Amazing Women

There are social benefits to Muay Thai that you may not have even considered. By joining a class or a Muay Thai club, you will meet lots of like-minded women who are also interested in the benefits of the sport.

Women who take part in Muay Thai are empowered, both physically and mentally. They’re inspirational and won’t back down from life’s challenges. They’re often amazing women and challenge the social norm of what a woman should be. They prove that you can be strong, powerful and healthy and get there using a sport that many people used to think was only for men.

Muay Thai is one of the best things you can do for your health, fitness and focus. Why not give it a try?!

Read More:  What is Joyful Movement and How to Find Yours

Author Bio
Darren Mitchell is a Muay Thai enthusiast and writer for the Best Muay Thai blog. He has trained for several years at gyms all over the world alongside some world-renowned fighters and coaches.