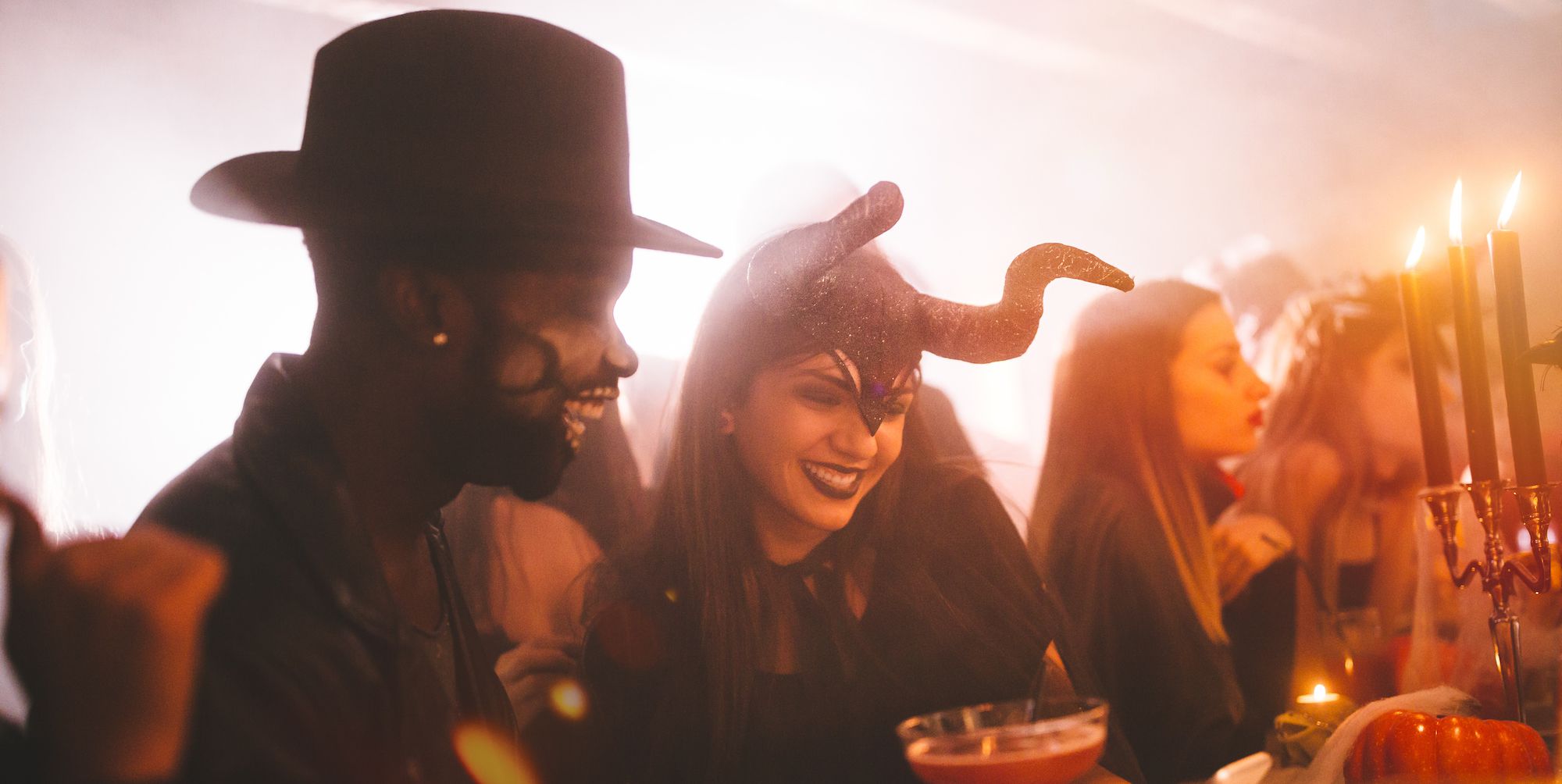 Ah, Halloween. The perfect chance to dress up as your favorite superhero or an evil clown. There’s no other day quite like it.

But, the costumes aren’t the only super fun part about the spooky festivities. There is also the hilarious (and almost always mortifying) moment you hook up with someone in said costume…aaaand the morning after.

Everyone’s been there. But some Halloween hookup stories are just too insane not to share. Here’s a roundup of the funniest costume sex fails, from cringeworthy to OMFG hilarious.

“I went out on Halloween dressed as a shotgun wedding, wearing this tight white dress and a stuffed balloon to look pregnant. The guy I was dating at the time showed up as a shuttlecock (like, in badminton). At the end of the night, we were trying to do it in the back of this cab we were in—but, it was impossible to get off his huge badminton outfit which involved a hula hoop. We managed to have sex inside the hula hoop costume, which took up most of the entire back seat.” —Anne B., 25

“My freshman year of college, I was dressed like a Catholic school girl and went to an off-campus dorm to hang out/make out with one of the baseball players. I slept over and he called me a cab home. He gave me an XL baseball shirt to wear back, but I still had on my knee socks, plaid skirt, heels, and makeup all over my face. The cab drops me off in front of my dorm, and I legit emerge into a CAMPUS TOUR for prospective students. I wanted to die.” —Brooke S., 31

“The guy I was dating at the time was dressed as Madonna and puked out of the limo on our way home. He also told me he loved me for the first time that night, all while in Madonna drag.” –Molly K., 24

“While dancing at a bar, I saw this man on stage with a pink wig and super short daisy duke shorts to compliment his long legs and cowboy boots. I was into him, so we started making out, then snuck away to a dark corner where I gave him a handy without anyone noticing.” —Holly H., 23

“I dressed as a flapper, and I saw a guy at the party who dressed as Where’s Waldo. As the night went on, I had a few beers, and ended up spending the night at Waldo’s. Word got around and I got, “You found Waldo…in your BED!” jokes for the next month.” –Elizabeth T., 24

“Dressed up as a Victoria’s Secret angel (so basic, I know), I went home with a boy in a panda suit, because why not? When I woke up the next morning, he had left, but the panda head was still lying next to me in bed and scared the shit out of me! It was hilarious.” —Katherine H., 21

“This dude and I left a party to hook up and ended up back at his place. His roommate was already back home in the dorm, so we went to the basement where there was an open bathroom. When he bent me over the sink, I noticed that with each thrust, the sink was coming more and more off the wall. Then all of a sudden, the sink fell off the wall and into my hands. The ironic part is, we had dressed up as robbers! So as I’m holding this sink in my hands, it actually looked like I was trying to steal it! I gently placed the sink on the ground and we finished on the bathroom floor.” —Taylor F., 23

“I dressed as Carrie Bradshaw and did a stride of pride home in a slightly dirty tutu and pink tank top. I couldn’t help but wonder why I had chosen such an obvious costume to walk home in the next morning. Oh well!” —Elizabeth O., 25

“My friend and I dressed up in obnoxious matching snowman outfits one fateful night and BOTH ended up going home with the guys we were crushing on. Turns out, Frosty the Snowman is magic in more than one way…” —Kelly W., 28

“A few years ago, I wore a Poison Ivy costume I made out of a corset and some frilly panties. I ended up at my boyfriend’s house in another borough and the next day, Hurricane Sandy happened. I spent the next week stuck at his place with only my extremely scandalous costume because my apartment building was flooded and there was no way into the city.” —Connie C., 26

“He was a lumberjack with a painted beard, I was a flight attendant. We hooked up on the floor of my friend’s room while they were both in their beds and the next morning, I went to class with paint-on-beard remnants on my face. The whole class knew…” –Eleni P., 25

“At a frat party for Halloween one year, I was making out with my crush. He started to get all handsy with my hair. What wasn’t sexy was that half my head was filled with real-looking clip-in extensions because I thought they made me look more like an angel with my costume. As he dug his fingers into my hair, he started to dig into the extensions. Worst nightmare ever? He pulled out my extensions! A little bit traumatizing, to say the least.” —Brooke F., 23