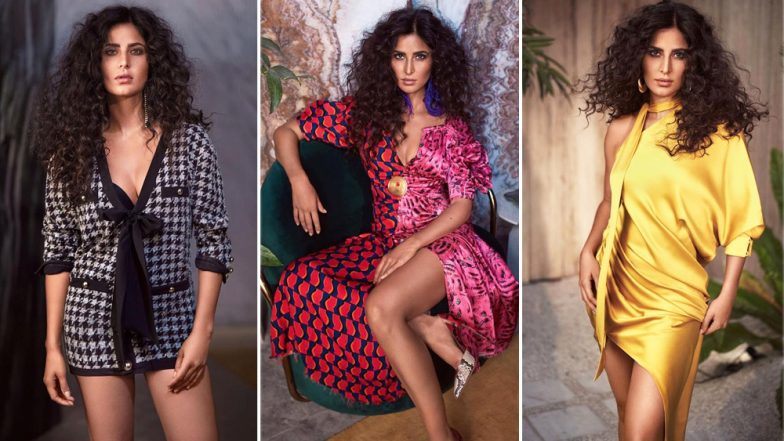 We all should thank Katrina Kaif for being a breath of fresh air. Amid the constant wedding photos of Bollywood and TV beauties, the actress who claims to be ‘single’ for the longest of time, posed for Vogue India magazine. The super-hot pictures clicked for this magazine are now slowly crawling out on the internet, giving us a breather from the repetitive pictures from two high-profile weddings. She looked straight into the camera, flaunting her newly styled curly hair like a pro. Katrina Kaif Calls Break-Up with Ranbir Kapoor a Blessing: “I Was Able to Recognise My Patterns”.

The star turned into the cover girl of Vogue India’s December 2018 issue. The official handle of the magazine shared some more pictures of the stunner, all hotter than the other. From thigh-high slits to sweater dresses, she looked sexy in each one of them, proving who is boss girl in the tinsel town. Her curly hair, which is for her role in Salman Khan starrer Bharat was styled by Yianni Tsapatori. Her flawless make-up was taken care of by Daniel Baur. Styled by Anaita Shroff Adajania, Katrina Kaif fit perfectly in the photos captured by Greg Swales.

Check out the pictures here

Kat is hotness personified in this sexy slip dress

How to Wear Thigh-High Slits…

They described it perfectly: Sunshine!

Speaking of her films, not much was seen by her end in Thugs of Hindostan starring Aamir Khan, Amitabh Bachchan and Fatima Sana Shaikh. On the other hand, we see an entirely unabashed side of her in Shah Rukh Khan-Anushka Sharma starrer Zero. Her broody, kohl-laden eyes and carefree attitude has managed to win the fans. Then there is her film, Bharat, where she has opted for an entirely different look. It is safe to say that the 35-year-old actress is at the peak of her filmy career right now and we hope that she receives the returns of her experiments. Coming back to her sultry photos, which one is your favourite?