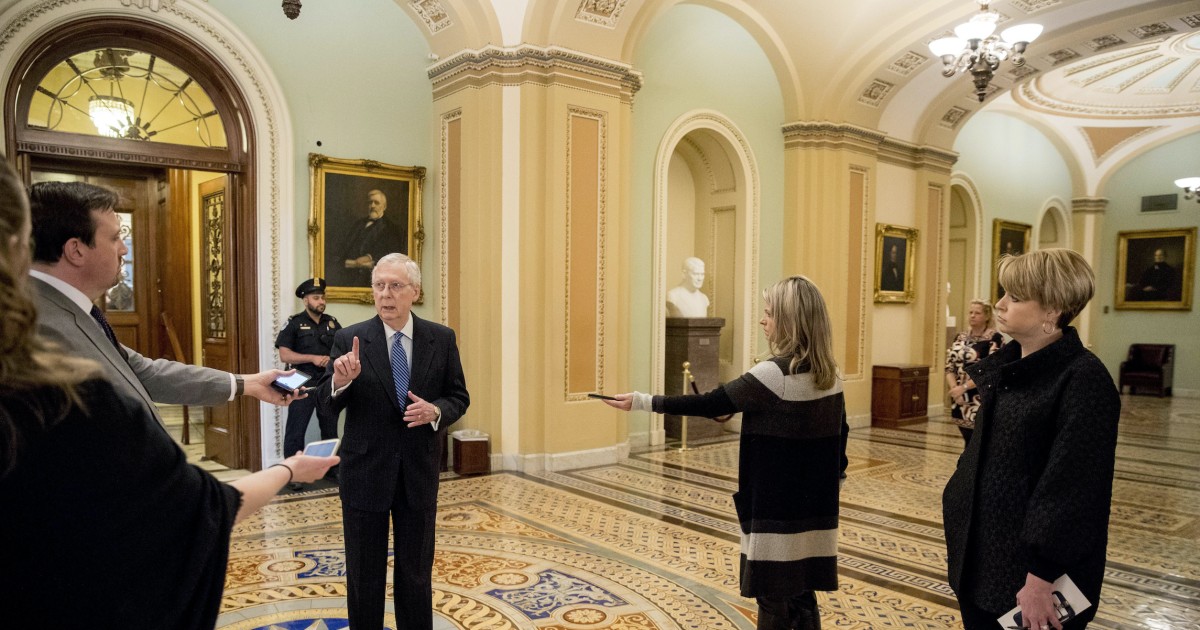 The Trump administration is looking to have pandemic relief checks deposited in bank accounts in a matter of weeks.

“Our expectation is within 3 weeks, we will have direct payments out where we have depository information,” Treasury Secretary Steven Mnuchin said while briefing the press Wednesday evening about the status of the $ 2 trillion pandemic relief bill passed by the Senate later that day.

The legislative package, featuring $ 1,200 tax rebates for adults and rescue loans and grants for businesses, only came together in the early hours of Wednesday morning, when Senate Republicans and Democrats finished negotiating its terms. Congress and the administration are moving it at top speed to aid businesses and families suddenly thrust into financial distress by the pandemic. House leaders aim to pass it Friday.

President Trump, at the same briefing, said that he would sign the bill “immediately.”

First, Senate Majority Leader Mitch McConnell had to navigate opposition from Republicans Tim Scott, Rick Scott, Ben Sasse, and Lindsey Graham, who said Wednesday that the bill would incentivize layoffs, arguing that some people would make more money by collecting unemployment benefits than by working, thanks to the $ 600 flat federal unemployment benefit in the bill.

In addition to giving a $ 1,200 tax rebate to most adults and $ 500 for most children, the bill would also provide more than $ 350 billion in aid to small businesses through forgivable loans and $ 500 billion in loans to big industries. It would also provide $ 150 billion for the healthcare system, which is already stretched thin as the number of confirmed cases jumped to 66,132 Wednesday, up by about 12,000 from Tuesday, according to a pandemic tracker maintained by Johns Hopkins University.

About half of those cases are in New York. Gov. Andrew Cuomo, a Democrat, said Wednesday that the Senate bill “would really be terrible for New York” on the basis that additional funding the state and city would receive would only be a “drop in the bucket” relative to the revenue losses the governments are going to experience. A more immediate problem, though, is ensuring that New York City has the personnel, space, and equipment it needs to handle thousands of coronavirus patients who are likely to need hospitalization and intensive care, including intubation. The state and federal governments are racing to deploy ventilators.

“That really is, by far, the hottest spot,” said Trump. “They’ve got a number of very tough weeks ahead of them.”

Yet there are signs that the extreme measures taken to limit transmission are working, Cuomo said Wednesday. He noted that the acceleration of hospitalizations had come down in recent days. “That is almost too good to be true. But the theory is given the density that we’re dealing with, it spreads very quickly, but if you reduce the density, you can reduce the spread very quickly,” he said.

Trump appears to be eager to look beyond the problem getting worse and toward the time when commerce returns to normal. On Wednesday, he accused the media of favoring tighter restrictions as a means to hurt him politically.

The LameStream Media is the dominant force in trying to get me to keep our Country closed as long as possible in the hope that it will be detrimental to my election success. The real people want to get back to work ASAP. We will be stronger than ever before!

Vice President Mike Pence said that the task force is coming up with recommendations for allowing more people to go back to work but said the best way to accelerate the timeline is for everyone to practice the social distancing guidelines put out by the task force.

Yet the virus may pose a threat to the United States long after people initially go back to work. Top government infectious disease expert Dr. Anthony Fauci warned that the virus may actually be seasonal, and short periods of quarantine may not stop the spread outright.

“The reason I say that is that what we’re starting to see now, in the Southern Hemisphere … is that we’re having cases that are appearing as they go into their winter season. And if, in fact, they have a substantial outbreak, it will be inevitable that we need to be prepared that we’ll get a cycle around the second time,” Fauci said during Wednesday’s White House press briefing.

A vaccine is in the works, but lengthy clinical trials would keep it out of the public’s reach for at least another year. Anti-viral treatments are still being investigated, too, but the Food and Drug Administration has yet to approve a coronavirus treatment.

“I know we’ll be successful in putting this down now. But we really need to be prepared for another cycle,” Fauci said. “And what we’re doing, I believe, will prepare us well.”