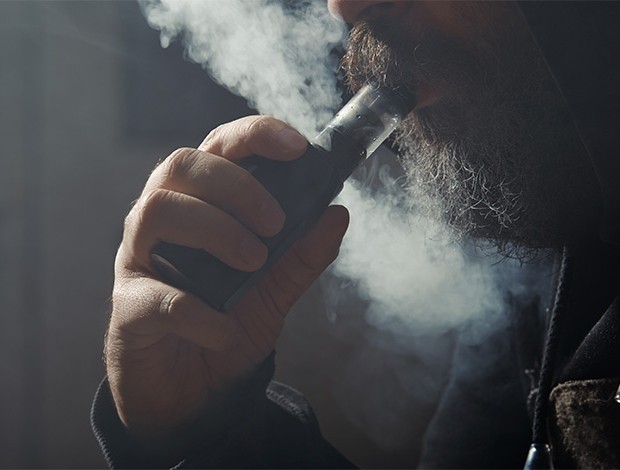 In 2015, my now-and-then smoking habit had crept up to two or three cigarettes per day, and a lot more when I was drinking. After one tobacco-laden weekend resulted in a full week of phlegm and coughing, I felt like I had to do something. I was working in Times Square at the time. From the window outside my cubicle, I was face to face with video billboard playing the painfully hip new commercial from the e-cigarette company Juul. Turns out: marketing works. Before I knew it, I’d ordered one for myself and fallen in love at first hit. Everything about the e-cigarette seemed, and felt, better than my old cancer sticks. The smell, the cost, the surprisingly strong amount of nicotine it delivered per hit. At the same social events where I once belched noxious, girlfriend-repelling, shirt-stinking tobacco fumes, I was now puffing crème brûlée-scented fog clouds.

(Related: Not exercising could be deadlier than smoking, study finds)

E-cigarettes have been around since 2003 and we still don’t know much about their health effects or safety. But, as we’ve pulled the flavoured smoke from our Juuls and similar vapourizers, we’ve blindly assumed one thing: they have to be a better idea than smoking cigarettes.

Cigarettes might be the least controversial enemies of your health. They cause cancer, emphysema, heart disease, even impotence. While saturated fat and alcohol still have their supporters, nobody is rushing to cigarettes’ defense.

Enter e-cigarettes, which were new, high-tech, and came with no proven health risks. There were no long-term studies yet, but common sense dictated that if you wanted to quit inhaling tobacco through smoking, the least you could do was switch to e-cigarettes.

(Related: Is sugar the new smoking?)

That was my train of thought, anyway.

When people voiced health concerns, I came to my Juul’s defense. If you’re going to smoke it’s clearly better to go with e-cigarettes. In fact, the U.K.’s Public Health England had published a review concluding vaping was 95 per cent less harmful than smoking. A Greek study had found 81 per cent of people in a group of over 19,000 had successfully used e-cigs to quit. I’d heard (and inhaled) enough. This was the answer.

(Related: How to quit smoking forever)

It was the wrong one. 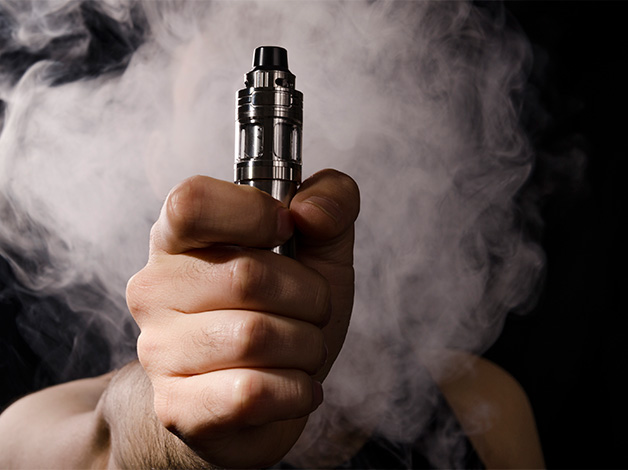 Over the next few years, the optimism over e-cigarettes waned as their popularity skyrocketed. Juul’s sales increased over 600 per cent each year to become the best selling device on the market while I inhaled an atmosphere’s worth of vanilla vapour into my lungs. I never kidded myself into thinking that this habit was harmless, but my conviction that they were less harmful than cigarettes made the endeavor seem worthwhile, even praiseworthy.

After all, the average cigarette has some 4,000 chemical compounds, including dozens of confirmed carcinogens, while my e-cig cartridges contained just five: distilled water, nicotine, glycerin, propylene glycol, and some flavouring.That’s a flimsy argument: “something with lots of scary chemicals is less dangerous than something with just a few scary chemicals.”

(Related: 9 ways to crank up your lung health)

Firstly that propylene glycol, largely responsible for making your breath look like a cloud of mist, is also found in fog machines used in concerts and has been linked to chronic lung problems among stagehands. It’s actually FDA-approved for use in food (believe it or not it’s common in pre-made cake mix) but when heated to vaping temperature it can produce the carcinogen formaldehyde.

In other words, just because something is safe to eat doesn’t mean it’s safe to be inhaled. (Duh.) Vaping also seems to trigger potentially harmful immune responses in the lungs. It’s not just tasty air.

“As time passes, the evidence that these are a lot more dangerous than people thought keeps piling up,” says Dr. Stanton Glantz, Director of UCSF’s Center for Tobacco Research, Control & Education. “In one disease they seem worse than cigarettes: they seem to turn on more inflammatory and depressed immune function in lungs than cigarettes. And evidence the effects on the cardiovascular system approach that of a cigarette is also piling up.”

(Related: The best way to stop smoking for good)

Indeed, the “vapour” may have a lot more than those five ingredients listed above. Some studies have found it to contain lead, nickel, tin, and silver from the machinery inside the devices along with formaldehyde, manganese, tolulene, and other ingredients linked to cancer, central nervous system problems, and other possible health issues. A 2018 study of e-cig smokers’ urine found at least five of the same carcinogens found in cigarettes.

It had become apparent that there were problems with my vape-saves-the-day habit. 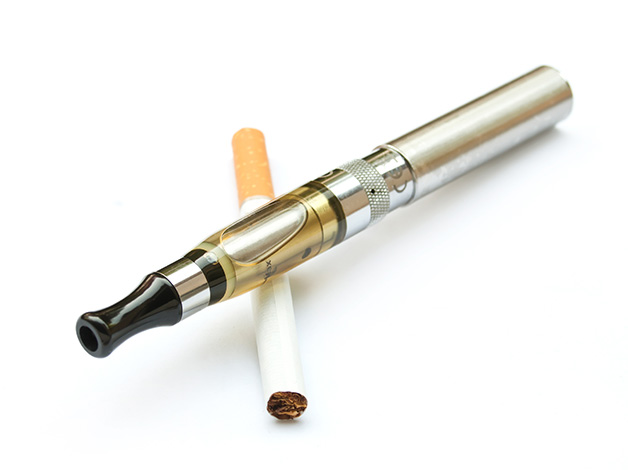 As the National Academies of Sciences put it in an extensive report published this year, “Ultimately, the potential health benefit of e-cigarette use for cigarette smokers will depend on the characteristics of the smoker, the product, and how the device is used.” As it stood, I had the characteristics of someone with a pretty addictive personality and making nicotine easier to consume was not the right move for me.

It’s just too easy. You can vape anywhere. My girlfriend is all too happy to kiss me if I’ve been inhaling vanilla fumes. My clothes don’t reek of tobacco when I duck outside for a hit. But, and this is a big one: you can do it inside. Sure, you’re not supposed to, but a Juul hides easily in the hand and when exhaling slowly, nobody can see or smell the cloud. While I used to have to put on a coat, leave my friends, and go outside to smoke a cigarette, I can now “smoke” inside–it’s like the 90s all over again.

Three years after puffing my first e-cig had led to me vaping all the goddamn time. All night when I’m out with friends and now all day while I’m at work. To be clear, I never even used to smoke during the day when I was using cigarettes. But if a project is particularly stressful (or just slightly vexatious, any excuse will do), my sleek little e-cig is just sitting in my bag at my feet. Maybe just one puff. Maybe one more. Like a never-ending pipe, you don’t know when you’ve had enough, when you’ve had a cigarette’s worth of nicotine. One quick puff to slay your stress can turn into one puff every few minutes, then whenever I get the slightest urge.

Isn’t vaping meant to help you quit nicotine? As encouraging as the data was a few years ago, it’s starting to look like that’s not the case. The FDA is yet to approve them as a smoking cessation aid and a recent CDC study found that most adult e-cigarette users — 58.8 per cent of them — don’t stop smoking cigarettes and instead wind up using both products.

“E-cigarettes and other forms of vaping have been tested as a way for smoking cessation and they don’t do very well, certainly not as well as the standard FDA-approved nicotine replacement products,” says Dr. Norman Edelman, Senior Scientific Advisor for the American Lung Association. “The fact that you tried to get off of cigarettes by vaping is not surprising,” he told me. “That happens to most people who try it. It just turns out it’s not that effective.”

He notes that the most effective methods involve some sort of pharmaceutical, either nicotine replacement patches or pills, combined with a program that helps you deal with the problems of quitting smoking. (The American Lung Association recommends Freedom From Smoking.) Even then the average quit rate is just 25 per cent, so even the best methods only have a one in four chance of succeeding.

Watch: 25 moves that will blast fat and build muscle

“Although it is true that some people successfully quit smoking with e-cigarettes, for most smokers who use e-cigs it actually makes it harder to quit,” says Dr. Glantz. “If you look across all the studies, what they show is smokers who use these cigs are about a third less likely to quit smoking than smokers who don’t. That doesn’t mean there aren’t some who use them successfully to quit but they’re a small minority, 10 or 15 percent. For most people they inhibit quitting and they often go back to smoking cigarettes.”

Eventually, I was vaping pretty much all day, every day. My lung capacity was absolutely destroyed. I couldn’t do cardio to save my life; walking up stairs sucked the wind out of me. My stamina and day-to-day life was vastly more affected by this vaping habit than when I used to just smoke a few cigarettes on Saturday nights.

That’s why when the last time my Juul broke (as they regularly do), I didn’t get a replacement.

I bought a pack of cigarettes.

Not a great choice, I know. But now that I’ve gotten rid of the endless, all-day vaping, and a nicotine hit makes me stink like a dive bar ashtray, makes my mouth taste like dirt, and makes my friends recoil from my presence, I’ve got reasons to cut back. Since ditching e-cigarettes for cigarettes, I’m back to smoking on weekends only.

Now, I hate cigarettes more than ever. On the rare occasions I partake, instead of filling my nostrils with the taste of a warm crème brûlée, my mouth tastes like a street gutter for an hour. My fingertips reek. And smoking a cigarette from start to finish takes so long. I’m sick of it before I’m half finished. I like the nicotine, but everything else about the experience is viscerally revolting.

E-cigarettes, in all their stylish sneakiness, took over my life. Cigarettes pushed me back to shivering outside the bar where a nicotine habit belongs. I do still plan to quit completely — I do — but not with vaping. I want to carry the stink and taste that won’t let me forget I’m damaging myself when I’m smoking. The way to quit isn’t through a device that made a nicotine hit easier, or fun. I have to learn to hate it.

A version of this article originally appeared on MensHealth.com