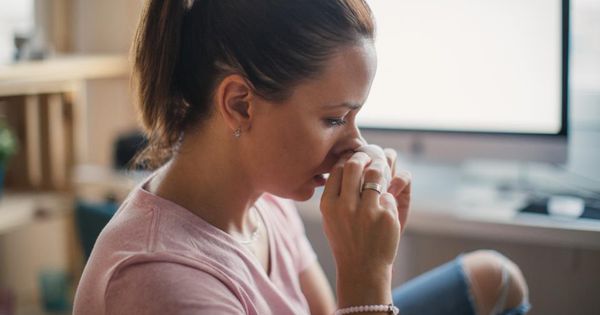 That’s what Greg Phillpotts learned after suffering from a runny nose for 5 years, as described by Josh Chapin for ABC 11 Eyewitness News. Here’s a Tweet from Chapin:

He thought it was just allergies or even just a runny nose. It turned out to be something he needed surgery for. It’s all next at 11 #ABC11 @MountSinaiNYC pic.twitter.com/Z5ZsU5s3G2

It turned out that Phillpotts was not experiencing constant allergies as he had been told previously. Instead, cerebral spinal fluid (CSF) was leaking out into his nose. CSF is a fluid that surrounds your brain and spinal cord, cushioning, protecting, and supporting those parts of the body. CSF is one of the reason your brain doesn’t land with a thud every time you do a jumping jack or listen to Metallica. Normally, the membranes keep the CSF contained, a bit like a big water balloon around your brain and spinal cord. However, anything that may damage the membranes, such as a head injury, surgery, or a tumor, may leave a hole though which the fluid can leak out, potentially into your nose or ear.

Here’s a TODAY show segment about another person who had a somewhat similar experience:

As you can see, such a condition can go misdiagnosed for years. That’s because “brain fluid leaking” is usually not the first thing you think about when you have a runny nose. Usually, it’s a cold, the weather, allergies, cheap cologne, watching too many rom-com movies, or that darn cat. After all, the condition is very rare. However, consider the possibility of a CSF leak if you find the following:

As the Cleveland Clinic describes, your doctor can test for a CSF leak by having you lean forward to see if the drainage increases, using a scope to examine your nasal passages, ordering imaging like a CT or MRI, and testing the fluid to see if it resembles CSF. If a CSF leakage has started recently, your doctor may recommend a more conservative approach, giving the defect time to heal on its own. This means staying in bed for a week or 2 and avoiding movements that may keep the defect from healing coughing, sneezing, straining, or laughing. Therefore, you may want to take stool softeners and limit your television watching to C-SPAN.

If conservative approaches don’t resolve the leakage, surgery may be in order. Depending on where the defect is located, your doctor may be able to fix it with using a scope.

You don’t want to let a CSF leakage go on without fixing it. As one of the surgeons says on this segment of the television show Botched, “brain fluid coming out of the nose is a major concern”:

There are very few sentences with the words “brain” and “coming out of the nose” that should not raise concern. Any defect in the membranes surrounding and protecting the brain and spinal cord can serve as a revolving door for bacteria and other microbes. Such microbes can cause very serious and life-threatening infections such as meningitis. Moreover, CSF leaks can progress to more debilitating symptoms such as severe headaches or be the sign of a more serious problem such as a tumor.

As KidsHealth has pointed out, there’s an old joke that says if your nose is running and your feet smell, you must be upside down. Well, if your nose keeps running for weeks or months, see your doctor because something doesn’t smell right.