Lucy Powell’s IBS had her running to the loo 15 times a day, avoiding intimacy and holding herself back at work.  Then an over-the-counter powder changed everything – Anna Magee reports

21 years ago, just after the birth of her first child Lucy Powell got a nasty bout of gastroenteritis, which included severe fever, vomiting, tummy cramps and diarrhoea.

But while the acute illness passed, along with the fever and vomiting, Lucy, now 43, soon developed nausea, diarrhoea, bloating and stomach cramping that continued to plague her for the next 18 years. The symptoms occurred virtually every time she ate and confounded her doctors.

Lucy 43, developed nausea, diarrhoea, bloating and stomach cramping that continued to plague her for 18 years.

‘I tried absolutely everything,’ Lucy, a community support team leader, remembers. ‘Going gluten-free, reducing dairy and then sugar. I tried to reduce the amount of salad and raw food I ate. I tried cutting out healthy foods like onions and apples because they would always set me off.

‘Nothing worked, and I would often need the loo up to 15 times a day with these terrible runny bowel movements – I was taking around six Imodium (anti-diarrhoea over-the-counter tablets) each day. It was horrendous.’

Things got so bad that Lucy’s work was affected, not to mention her confidence. ‘I was a support worker at the time and I would have to run to the toilet and leave someone with learning difficulties on their own out in the community.

‘Alcohol would set me off so I would have to take plenty of medication before a night out too.

‘Having a relationship and being intimate was difficult for me too, I was often so bloated that I looked pregnant and then constantly running to the toilet was awfully embarrassing.

‘I had every test going, coeliac disease, food intolerances, cameras put into each end.’

But everything was normal, so two years later Lucy’s doctors diagnosed Irritable Bowel Syndrome (IBS) and gave her anti-spasmodic medication.

‘That gave me some temporary relief, but the symptoms always returned and they stayed with me for almost two decades.’

Alcohol would set me off so I would have to take plenty of medication before a night out too.

If you’re one of the 13 million Brits that suffer with IBS, the very act of eating probably brings with it the anticipation of symptoms like Lucy’s including bloating, abdominal cramping, diarrhoea, constipation and trapped wind.

You may have tried exclusion diets and all manner of pill and potion to alleviate your symptoms.

But now, mounting scientific evidence – including one study published earlier this month – is showing that a simple powder known as a prebiotic, could alleviate such gut symptoms long-term.

How it compares to diet changes

The latest research, published in the October 2018 issue of Gastoenterology compared the effects of taking a prebiotic powder called Bimuno (£11.99 from health stores and online) to a low-FODMAP diet (an exclusion programme often prescribed by dietitians for gut problems) on patients with IBS symptoms.

It showed that taking Bimuno daily for four weeks was as effective as a low-FODMAP diet for the symptoms of IBS including bloating, gas production, abdominal cramping and constipation.

But more importantly, the research also found that those who were treated with the prebiotic powder reported sustained improvements in symptoms two weeks after they had stopped taking it, while those on the low-FODMAP diet saw their symptoms reappear immediately when they discontinued the diet.

Three years ago, Lucy read about Bimuno in a national newspaper.

‘After changing my diet so many times, I had given up on everything and saw a story about a woman who had been so ill with IBS that she ended up repeatedly in A&E and I could understand why because I had had times when the pain was so severe, it felt like a real emergency. She found relief by taking this Bimuno powder – it was all-natural and not expensive, so I had nothing to lose.’

Just four days later Lucy’s diarrhoea had stopped.  ‘I had the first normal bowel movement I had had in years and my whole system felt calmer after I ate,’ she remembers.

‘I thought to myself, have I gone mad? Is this psychological? Some sort of placebo? It was only four days after I had started putting it into my coffee in the mornings but I just felt so much better.’

In the study, researchers took a group of 40 patients with IBS and put half on a daily prebiotic supplement and asked them to follow a Mediterranean diet rich in fish, fruit, vegetables and whole grains and put the other half on a low-FODMAPs diet.

‘Then we looked not only at their classical IBS symptoms but also at changes in their gut bacteria [by examining their stools].

In the group taking the prebiotic, the researchers also observed an increase in beneficial bacteria in their gut, an effect not seen in the group on the low-FODMAP diet.

‘We noticed an increase in a beneficial bacteria called bifidobacteria in those taking the prebiotic supplement,’ says Prof. Gibson.

‘It’s very desirable to increase this particular species of bacteria in the gut as it has favourable effects on IBS.

‘Breast-fed infants for example have higher levels of this bacteria in their guts and its one of the reasons breastfed children have lower rates of asthma and eczema problems, as the gut affects such issues as well as contributing to more obvious gut problems.’

What are prebiotics, anyway?

You have probably heard a lot about probiotics in the last 12 months – foods and supplements that help re-colonise good bacteria in the large intestine.

What few of us know is that around 60-70 per cent of our immune system lies within our gut. That means that over half of our ability to fight disease is governed by our gut microbiota, the population of microbes or bacteria that grow in our lower intestine.

You’ve probably heard of ‘good bacteria’ that comes from probiotic foods such as sauerkraut, kefir (fermented milk), kombucha (fermented tea) and natural yoghurt as well as probiotic supplements. They come in species with Latin names such as bifidum and lactobacilli.

Read More: Fermented foods – are they worth the hype?

The explosion of interest in probiotics and gut health in the last 12 months has come as a result of researchers linking our gut microbiota not only to IBS and our immune system, but also to our mood (they claim a large proportion of the brain neurotransmitter serotonin, which is boosted by antidepressant medication is made in our guts), our risk of obesity, our sleep patterns and even autism in children.

But the supplement that was the subject of the research wasn’t a probiotic but a prebiotic, which is designed to feed the good bacteria that is already present in your gut.

‘Prebiotics are like a fertiliser for the good bacteria in your gut; a form of nourishment to help the good bugs grow,’ says Prof. Gibson. ‘But prebiotic foods are carbohydrates such as fruit and vegetables – many of the things you can’t eat on the low-FODMAPS diet because they cause fermentation and gut symptoms.

Prebiotics are like a fertiliser for the good bacteria in your gut; a form of nourishment to help the good bugs grow

These foods feed and increase the good bacteria in the gut, without feeding the bad and are also resistant to heat, oxygen, the body’s enzymes and acids so therefore not destroyed, digested or absorbed as they travel through the digestive system. The only trouble is, they ferment in the gut and can really exacerbate IBS.

‘The prebiotic supplement we used in the research contained the prebiotic qualities of such foods, without the effects of fermenting in the gut from other prebiotic foods that cause those with IBS such problems.’

That means prebiotics reach the lower part of the intestine – where the hungry microorganisms live – and feed the good bacteria there, helping them grow and multiply.

It’s how they can help decrease the fermentation in the gut that could be causing wind, bloating and other IBS symptoms. 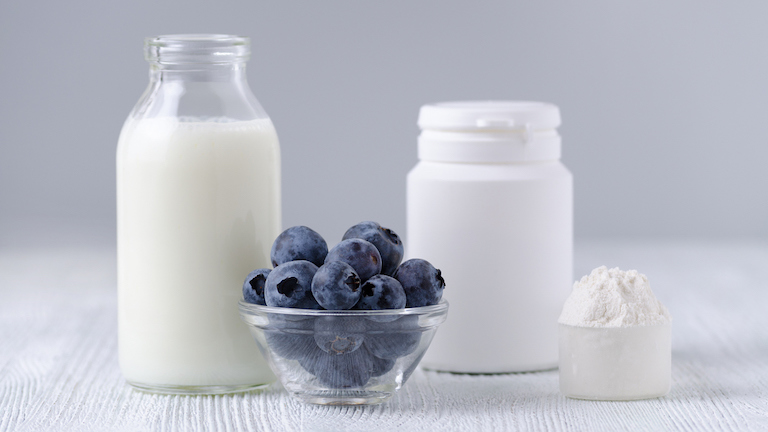 Unlike some probiotics which can be affected by the digestion process and destroyed, prebiotics reach the colon intact and unadulterated, says Prof. Gibson. ‘That means they can feed the good bacteria already there, helping them proliferate, helping general digestive and immune health.’

So, is it safe to take a prebiotic supplement indefinitely? ‘This prebiotic is a food and it’s entirely safe to take long-term,’ says Prof. Gibson. ‘It’s always good to talk to your doctor before you change anything though, especially if your symptoms are severe’. You simply add the Bimuno powder to hot or cold drinks or cereal or have it as pastilles.

Three years after first trying Bimuno in her coffee, Lucy is still taking it – and life has changed immeasurably. ‘I have managed to get a promotion at work because I had the confidence to up my game and that was recognised.

‘I have met a lovely man and we have been in an intimate relationship for the last two and a half years – in the past I was so wary of intimacy as I was so embarrassed about running off to the loo every five minutes.’

Lucy with her partner David

While she still gets the odd flare-up, these are few and far-between. ‘If I drink too much or get under pressure at work, I might get a short bout of cramping or diarrhoea but these are short-lived and the bloating is very rare now. I just wish more people knew about this cheap and simple treatment for IBS. Compared to all the exclusion diets I tried, the constant medication, it’s a Godsend.’

What is the low-FODMAP diet for IBS?

FODMAPSs are a group of foods that aggravate gut symptoms because they ferment in the large intestine, causing trapped wind, bloating, abdominal cramping and constipation.

Up to about a third of IBS patients are recommended a low-FODMAP diet, says Glenn Gibson, Professor of Food Microbiology at the University of Reading and co-author of the study.

‘While these foods ferment in the gut and cause IBS symptoms, they have other favourable characteristics including being rich in fibre, vitamins and antioxidants so in the long-term it’s not a good idea to cut them out,’ he explains.

Other current treatments to IBS

‘Current treatments for IBS tend to focus on low-FODMAPs diets. As well as medical treatments such as anti-diarrhoea medication, laxatives for constipation and anti-spasmodic drugs to help with spasms,’ says Prof. Gibson. ‘They treat the symptoms but they don’t improve overall gut health; they have no long-term impact on good bacteria to make a lasting improvement in symptoms.’

Indeed, studies looking at GP perspectives of IBS have found that an overwhelming majority view it as a psychological disorder.

Now, as increasing evidence suggests that in fact, IBS is a disorder that while it is certainly exacerbated by stress, has its foundations in just the place it manifests – the gut – more and more research is being done looking at treatments that can help our intestinal flora flourish.

Indeed, this latest study isn’t the first one looking at this particular prebiotic supplement’s effects on IBS. Professor Gibson’s team first created prebiotics in the early 2000s and since then, numerous studies have shown their beneficial effects on gut health and symptoms.

In another study published in April this year in the journal Neurogastroenterology & Motility the same prebiotic supplement was found to improve symptoms such as bloating, flatulence and abdominal pain.

Researchers took 83 subjects and split them into two groups. One group was given the prebiotic supplement and the other a placebo for two weeks and the group taking the supplement saw their symptoms improve within a week.

It builds on a mounting body of evidence for this particular prebiotic’s effect on gut symptoms both in animals and humans. 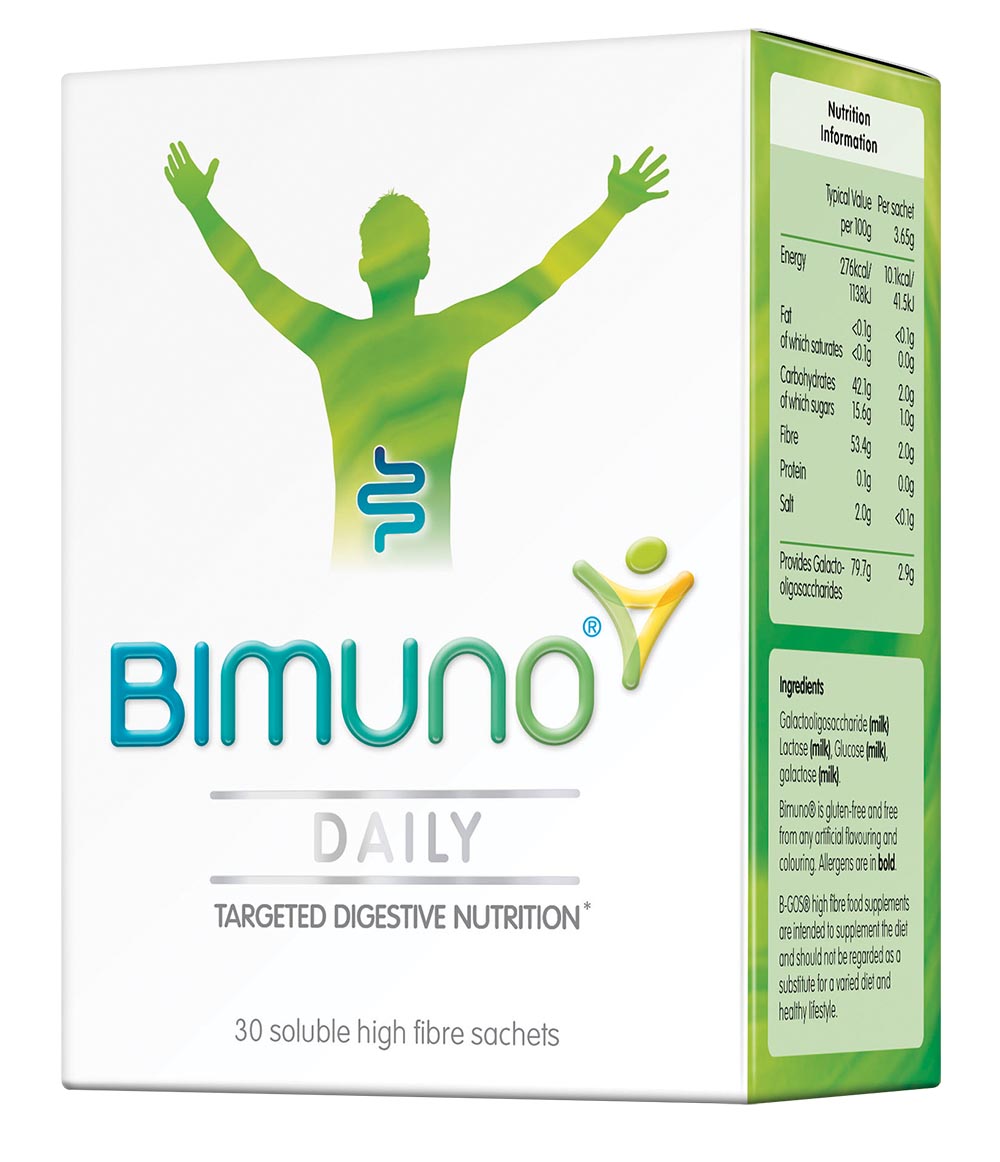 Bimuno Daily is available to buy from health stores and online, £11.99

What’s REALLY going on with your gut health?

What’s your body trying to tell you?

Do you have stress belly?